The race began at Piddledown common just off the drive way to Castle Drogo at the top of the steep Teign valley. The race would take us down to the river where we would then snake through the beautiful wooded hillside in a loop before returning to where the pain began. 7 of the 14 miles have positive ascent and 7 have more descent then ascent. This equated to around 2,400ft of elevation gain for the course. I actually enjoy a hill usually but the length and severity of what we were faced with really took the power from your legs, then your thighs got thrashed on the mad dash down. Unfortunately it takes twice as long to get up them, so the feeling of forever running up hill couldn’t be descended from.

I had this race scheduled months ago but due to the whole tree falling on my leg fiasco I cancelled as I didn’t think I would recover in time. However I managed to start running again, albeit gingerly 2 weeks ago so decided to reenter and run anyway with no expectations. Having said that I also felt good on the start line so thought I would try to hang onto whoever was in the lead for as long as possible. This turned out to be a great tactic until we reached the first hill and the eventual winner Lucy Mcalister stormed on, with two other men in toe and I  knew then that they were beyond me. After that realisation I just tried to concentrate on putting in some serious effort and to just assess how I felt. Where the tree landed on me is sore when I run and to a much greater extent when I race, it feels like someone has kneed me really hard in the side of my calf, but I don’t think it limits me much, that came purely from not being in the same class as Lucy and the others. 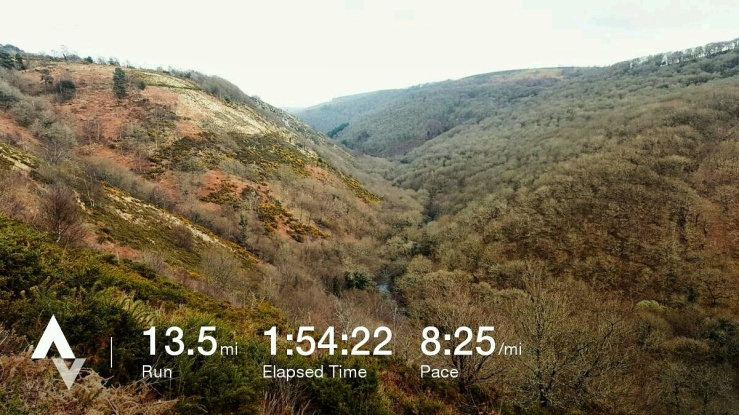 The whole Fingle woods area is truly stunning, and if you are going to suffer for a few hours blowing out of your arse running up and down hills it does soften the blow substantially when you are surrounded by such natural beauty. I finished in 6th place in 1:54 with the winner finishing 5 minutes ahead of second in 1:43. When considering the less then ideal build up to this race I was happy on reflection of my time. I found my major weakness to be speed. I kept overtaking the guy who finished 5th on the uphills and would always be overtaken on the down and unable to keep pace on the flatter fast sections. So I need to start to incorporate some speed work into my training if I want to compete at these events.

It was a very well organised event. The registration was seamless and the marshals who are so integral to these events were encouraging and ensured I didn’t run down any wrong paths. And for those who like these things the medal was a bespoke little number that is one of the nicest  I have seen.

View all posts by David Searle