The wild night run series is 8 races spread over the winter months organised by something wild events. Your position in each race determines your points which are added together in the series standings, your best 4 results are used to calculate your ranking and to crown the wild night run champion. As the name suggests they begin in the dark and take you around some of the South Wests most beautiful and brutal trails. I had other training and racing plans for the later part of 2018 so didn’t take part in any of the first 4 races. I was however well rested after Christmas and eager to begin a new training block which factored in some shorter local trail races to gauge how my training was progressing and where my fitness was.

The Moonlit flit was on the 19th of January right at the beginning of a period of slowly increased volume. It was originally scheduled to take place at Wrangaton golf club and be 10k of moorland hills and bog but due to landowner issues the event was moved to Ivybridge, which was only a few miles away but the new course was now fairly flat and took you out and back on the Erme Plym trail. I like to think my strength lies in my climbing and technical trail ability, so I was less confident looking at the new course.

It was a fast start with a lap of Ivybridge football pitch to spread the runners out before we departed down narrow single track. I set off with the front runners and after half a lap looked at my watch to see it saying 5 something min mile pace. I felt comfortable but also new I wasn’t going to be able to run 10k in the dark through sopping wet fields at that pace. Luckily nobody else was either. I was running alongside Nikolajas for the first few miles as we made our way down the Erme. We entered a field and I saw the reflective markers veer off up a steep muddy incline, I ran it as fast as I could hoping to pull away. I managed to gain some ground between us and kept running hard until we got to the bridge which signified the halfway point and we began making our way back to the start. I looked across the river and saw the other runners headlamps still on that side so knew I had a small lead which I managed to maintain until the finish. I crossed the line in 42:13, 1:53 ahead of second averaging 6:30 min mile pace for the 10 and a bit extra k.

It was a very enjoyable race and the two Clive’s pies I won went down very well on the family bike ride (I ran) the next day. 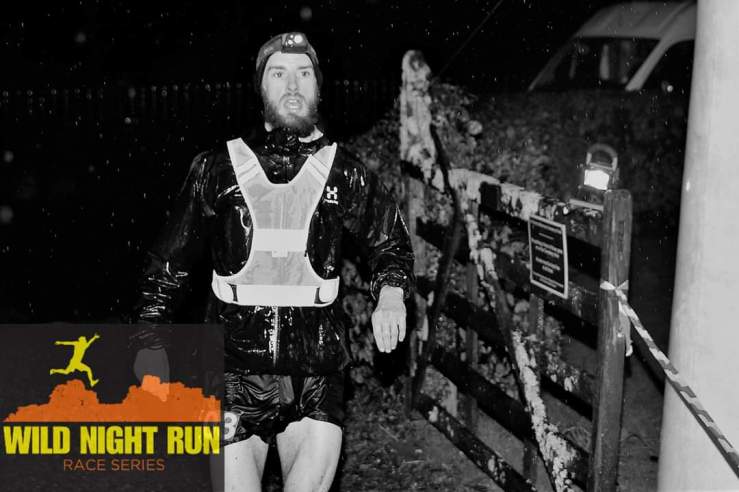 The next race was the Wild night run. The series blue-riband event held at South Brent village hall on the 9th February. It is billed as the South West’s toughest night race ’10 tough, muddy, rocky, boggy miles on Dartmoor’ The first half of the race is mostly uphill out onto the open moor. I started with a group of around 5 other runners. We ascended almost instantly up a road jostling for position. There are quite a few gates which slow your momentum and I soon was nestled into second, which meant I didn’t have to open the gates. As we kept pushing up towards Shipley bridge I realised that the man in front of me wasn’t doing the same race, he was doing the 5 mile Mild night run. The next climb takes you up a tarmac track to Avon Dam, it is quite gentle and very runnable. Every time I looked behind I could see Adam Holland the ‘king of the night’ right behind me. I knew that he was a much faster runner then me so if he remained so close I would struggle to keep my position on the descent to the finish. From Avon dam though there are a few miles of very boggy quite technical terrain before another short climb up Brent hill. I targeted this section as my chance to try to pull away and ran as fast as I could whilst remaining upright and keeping both shoes on my feet. I couldn’t gauge the distance to Adam’s lamp behind me in the dark. Every time I checked it seemed like he was on my tail, so I gave up looking and just ran as quick as I could until the finish, hoping he didn’t come flying by. To my relief he didn’t and I crossed the line in 1st place in 1:13:38, 4 and a half minutes in front.

As this is their premier race there were headlamps up for grabs for the different prize categories, which was a handy thing to win.

Both races were organised superbly and most importantly the course markings were foolproof which was handy because I have been known to go off course. I was pleasantly surprised with my performance in the races and will hopefully push on from here with Lavaredo being the big goal for this year.

Thanks to Ceri and Ben at Something Wild events for putting on such good races. And a special thank you to my supportive girlfriend Kelly and pal James, who saw me off and were waiting at the finish for both races.

View all posts by David Searle